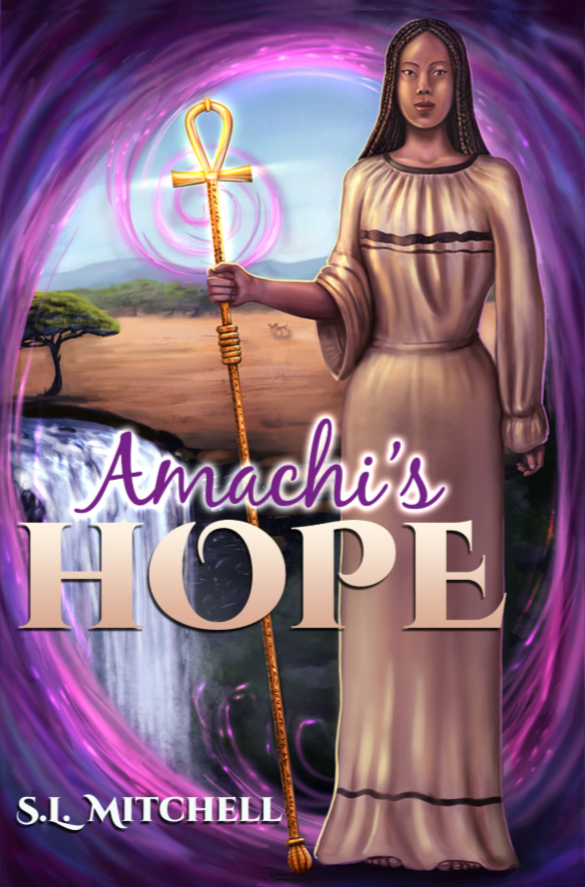 On the night of the Harvest Moon, AMACHI YENYO INOTU is brought forth to this realm by an Orisa (deity) who prophesies that she will be the catalyst of change, a herald of hope and a unifier for her people.  She would be called the Goddess of Light.  Shortly after her mother’s death, young Amachi begins to exhibit unique abilities. As a seer, she will venture down the path of destiny. As an immortal, Amachi will witness the lives and deaths of her people.

Amachi’s presence in the world awaken special talents inside her kin. Unfortunately, these gifts have left descendants open to danger from Orisa that see them as a threat.  As a demi-goddess, Amachi is not allowed to help humankind.  The consequence should she ignore this rule is dire.  But Amachi’s stubbornness, and inability to witness the suffering of others, have forced her hand. In this story you will meet Amachi, her descendants, and experience the trials and tribulations that await them.

AKIN and KAMAU in their rite of passage, encounter Eshu the Trickster.  An Orisa who will stop at nothing to end their lives before it has even begun.  Thanks to Amachi’s determination, the twins are prepared for the approaching conflict. In a battle to save their tribe and themselves, Akin and Kamau invoke the extraordinary talents they were blessed with and become men in the process.

MORENIKE, leader and defender of the Olorun tribe wields awesome ase (power).  As a multi-kinetic and possessor of the Amulet of the Pure, he is almost unstoppable. But continued use of the amulet has begun to strip him of his ka (spirit). Thanks to Amachi, Morenike is persuaded to teach his children how to manipulate the amulet.  Facing his nemesis the Shopona with his children at his side, Morenike dies and the defense of the tribe is left upon SEKOU and ABENA.  In a metamorphosis that is reminiscent of time past, the siblings defeat the enemy for now…

FELA is a seer born into a den of killers. The first of his kind to be seen since Amachi, Fela is used as a pawn by his people. He struggles daily to discover his true purpose in life until Amachi places him on the correct path.  Fela is not a warrior.  He must use cunning and intelligence to reach his goals. Faced with a decision that could very well mean the end of his own people, Fela confronts the fears that could hold him back from his destiny. His decision brings forth the beginning of a new era.

KIOI’s path was ruined from the start.  Snatched from his true mother’s womb, he was placed into the dark world of the Shopona.  Ruined, unloved, and broken Kioi dies a horrible death.  But fate and Amachi decide that they are not finished with him yet.  Can he change his ba, a disembodied spirit, to a khu, a luminous spirit?  With the help of Amachi and his ancestors, Kioi defends against an enemy who is a threat to both the living and the dead.  He lives only to die again, but his spirit will finally be at rest with his djotò (ancestors).